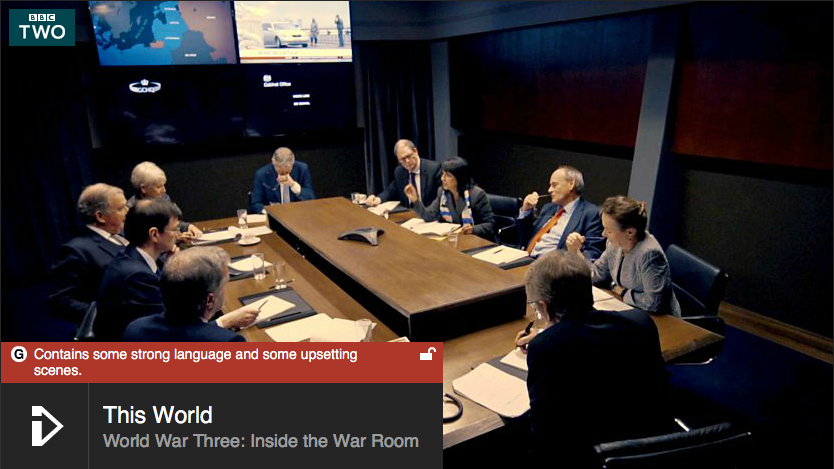 A committee of senior former British military and diplomatic figures (including Sir Richard Shirreff) comes together to war game a hypothetical ‘hot war’ in Eastern Europe, including the unthinkable – nuclear confrontation.

Following the crisis in Ukraine and Russia’s involvement in Syria, the world is closer to super power confrontation than at any time since the end of the Cold War. Now a committee of senior former British military and diplomatic figures comes together to war game a hypothetical ‘hot war’ in Eastern Europe, including the unthinkable – nuclear confrontation.

The War Room faces a scenario that has haunted western strategists since the Ukraine conflict began: potential Russian military involvement in the Baltic States of Latvia and Estonia. Like Ukraine these countries have sizable Russian speaking minorities, but unlike Ukraine they are members of NATO, whose founding treaty states that an attack on one ally is an attack on all of them. Because of this, western analysts regularly war game a situation where Russia seeks to exploit ethnic tensions in the Baltic and test the strength of the NATO Alliance.

These ‘war games’ are normally held in secret. For the first time, we have filmed a major war game with some of Britain’s most senior military, political and diplomatic figures. The War Room includes former Deputy Supreme Allied Commander Europe General Sir Richard Shirreff; First Sea Lord Admiral Lord West; Joint Intelligence Committee Chair, Baroness Neville-Jones; British Ambassador to the United States, Sir Christopher Meyer; and British Ambassador to Moscow, Sir Tony Brenton – and the group contains a whole spectrum of views about how we should regard President Putin’s Russia.

The war game was filmed over a several hours in a single sitting, using concealed cameras in a purpose built set in a secure location in Central London. The scenarios were developed over many months of research, including conversations with serving military, diplomatic and political experts around the world. The film captures the escalating drama and tension of an unfolding conflict and the heated debate, as the War Room decides what actions Britain should take – right up to the brink of Armageddon.

The film is directed by Gabriel Range using the kind of techniques he employed on the Bafta-nominated drama The Day Britain Stopped (BBC Two, 2003) and Emmy winning Death Of A President (C4, 2006) including a mixture of repurposed archive and drama to bring the consequences of the room’s decisions to life.