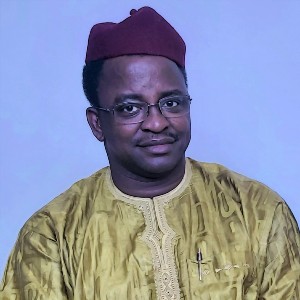 Illia is a published writer, radio journalist and researcher. For more than 20 years he has worked on socio-economic and political issues in Africa with first-hand knowledge of West-Africa. Born in Niger, he has travelled extensively across the region to Nigeria, Benin, Togo, Ghana, Ivory Coast, Burkina Faso, Senegal, Liberia, Guinea, Mauritania, among others.

Illia worked for various international organisations including BBC Afrique, the French section of BBC World Service, with an estimated audience of 11 million listeners. For more than four years he worked as a producer/presenter reporting and analysing current affairs in Africa.

He also worked for ARTICLE XIX, a London based Human Rights organisation, as author of two studies on freedom of expression in Niger and Mauritania.

Illia has attended some of the world’s most high-profile assemblies and has presented at the World Economic Forum in Davos, the Human Rights Council in Geneva and the UK parliament’s House of Commons in London.

He graduated from the University of Niamey (Niger), and holds a master’s degree (Portsmouth University, UK) which focused on the history, politics, and international relations of Francophone countries in Africa.