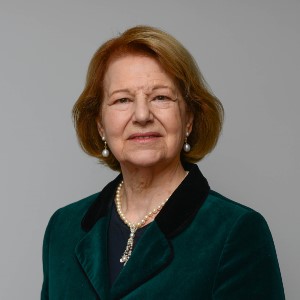 Baroness Nicholson of Winterbourne is a Peer of the Realm and a member of the House of Lords.

Baroness Nicholson serves as the Prime Minister’s Trade Envoy to Azerbaijan, Kazakhstan, Iraq and Turkmenistan.  Her parliamentary work is focussed on foreign policy, business, industry and the creative arts.

The Baroness has an acute and astute understanding of the developing world and countries in and recovering from deep and systemic conflict.

She is Founder and Chairman of the AMAR International Charitable Foundation.  She started the charity in 1991 in response to Saddam Hussein’s systematic persecution and extermination of the Marsh Arabs, and it has now grown to become one of the leading charities in the Middle East to rebuild lives in conflict countries.

She initiated considerable trade between Iraq and the UK and in 2009 founded the successful Iraq Britain Business Council (IBBC) which draws international and Middle East and Persian Gulf industries together for the purpose of growing more inward and outward investment.

She was elected to the European Parliament twice in 2009 and 2004 and served as First Vice President of the House Senior Committee for Foreign Affairs, Human Rights, Common Defence and Security Policy.

Baroness Nicholson served as official Election Leader and Observer in thirty-two nations in Europe, Africa, the Persian Gulf, Asia and the Indian subcontinent including Pakistan, Afghanistan, Lebanon, Iraq, Russia, Moldova, Kenya and Zambia.  She was Chief International Observer twice in Yemen and Armenia.

She served subsequently in and remains an Honorary of the Council of Europe Parliamentary Assembly.

Prior to her election to the House of Commons she worked as a Director of Save the Children.  Earlier she studied at The Royal Academy of Music after which she entered the IT industry where she developed computer software, built computer systems and managed contracts in the City of London, British Government Departments and Africa.

She is a member of The Reform Club, The Royal Over-Seas League, the Royal Society of Arts and an Academician of the Royal Academy of Arts.

She has been awarded eight Honorary Doctorates, has published 2 books and edited various others.